Happy Half-Birthday to the girls!!
Today is their half-birthday; they are 18 months old (1 and a half years for those of you who can't add) ;-)
We can't believe that they are this old. Here's a picture of what they looked like a year ago - seems like it was so long ago, yet not very long ago, if that makes any sense... 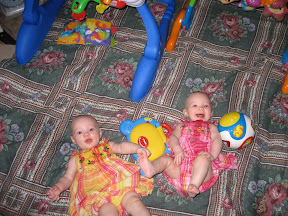 And now here's a current picture of them: 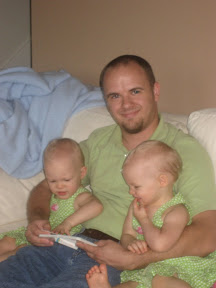 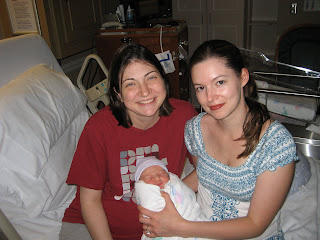 Our good friend Corrie just had her second baby girl on Saturday night - Annabelle Grace arrived at 6:12pm, weighing in at 8lbs 9 ounces.

We posted some new pictures in the 16-17 month folder - including our visit to see Annie.

Grandma and Grandpa Shaw got the girls their first cars - a "half birthday" present. We posted pictures of these too. Tomorrow is the girls' half birthday - 18 months old!! Can't believe they are already a year and a half old. We definitely agree with the saying "These are the longest days, but the shortest years."

We got to have a double-date on Saturday night with the Dittlingers to celebrate Father's Day(coincidentally when Corrie was in labor, but obviously we didn't know at the time). We had an awesome time actually eating and having good conversation during dinner (as opposed to chowing down as fast as we can before the girls start throwing their plates across the room).
Posted by Shaw at 9:37 PM 2 comments:

Check out our new pictures - they go all the way back to Easter.

We know, it has been a long time since we posted but better late than never, right?

Well, let's see what all has been going on.

The girls have gone from walking to running (running away from us, running into each other, running towards Elmo...). They have gone from liking Elmo to having a love-affair with that little red monster. Zella now asks for Elmo by name (usually comes out like "Elmo, Melmo, Melmo!") when asked what she wants to watch. Lila will shake her head vigorously if you ask her if she wants to watch Elmo.

We just took our very first family trip (notice, we didn't use the term "vacation"...) since the girls have been born. We spent about 5 days visiting Ashley's Aunt Trish ("Auntie") and Uncle Ray down in Victoria, but actually spent most the time in their camper down in Port Lavaca by the beach.

Man, I don't know what dreamworld we were living in when we came up with that plan. We ended up having to leave mid-day due to complications with the car we took (had to stop south of Dallas to get a spare tire - the only place that had one the size we needed in stock). So we had dinner, then we spent most of the drive down consoling sleepy babies who couldn't sleep. I think we had about 1 hour total quiet time.

Then, the girls of course didn't want to sleep in their pack-and-play, so they ended up going to sleep in our arms about 3 hours late every night. On the way back, we ended up playing Elmo and Blue's Clues for the girls most of the way home.

But, the plus side is that the girls LOVED the beach - once they got used to the idea of playing in the sand and surf.

Unfortunately the girls have had quite a few injuries lately and our trip was no exception, nothing major, just many. They must take after their father's clumsiness. The most memorable one on our trip was when Zella fell forward into a bucket on Uncle's boat and broke the bucket and cut her skin on the bridge of her nose. Mainly the girls just run into things and each other or fall down. This past weekend Zella decided to chase after Mommy as she we went to answer the door and fell straight on her face onto the tile. Well she got her first bloody nose. We feel so bad for them but I guess that is just part of being a toddler.

Well, our previous family vehicle is now in the classifieds. We had decided (and decided, and decided) against our own wants and wishes that we had to get a minivan, and couldn't find a way around it because of price and utility. We then tried to buy a minivan - twice! - and the first time the vehicle was sold out from under us after signing all the paperwork, the second time the vehicle was apparently sold before it was posted online (sounds like a bait and switch to me). But, I guess when dealerships and car companies are going out of business/getting forced out of business, morals tend to go out the window.

So then we ran across an affordable Dodge Durango. But it was an 06, and we decided against it because it was a good deal, but not a great deal. Then after we got home, we looked online and discovered that they had mis-labeled it as an 06 - it was actually an 07! I called, and they double checked the Vin, and it was an 07, and they would honor the deal they made - that changed a good deal to a GREAT deal. Sooooooo, we were right! We're not ready for a minivan (yet...).

We are excited that we are still "cool" :-) and we are pretty happy with our purchase.

Tornado season is in full swing in Texas. Always fun to pull two sleeping babies out of their cribs and bring them downstairs to the hall bathroom when the sirens go off. It sounds like Grandma and Grandpa Shaw lost part if not all of their big tree in the back yard while they were over here visiting tonight.
Posted by Shaw at 9:32 PM 1 comment: