So we moved the girls to their toddler beds tonight. On we go, check another milestone off the list.
Don't you wish life was that simple :-)
First off, the girls LOVED their new beds. Maybe it was the fact there were Princesses all over them; maybe it was the new teddy bears on them. Maybe it was because it was something different. Mabye it was because they weren't the same and they could chose their own.
Or maybe it was because they knew they could *GET OUT* !!!
And they did. I counted something like 50 times back to bed per girl. That's 100 pick ups and lay downs. And all in the span of about an 1 hour while Mommy was cleaning the kitchen and picking up thousands upon thousands of toys (or at least it seems that way).
I'm exhausted.
Lila thought it was the coolest game to crawl out of bed (in the almost pitch black room) and try to find Daddy. Then giggle, and go back to bed.
Zella thought up the game of "Let's find Daddy, and try to hit him in the head." Luckily, she can't see very well in the dark.
This worked well, until Zella realized that I was serious about bedtime. Then the tantrum started. The screaming. The wailing. The gnashing of teeth. The walking into walls (it was VERY dark, after all, and you -have- to try to get away from the man trying to put you back in bed). After an eternity or two, she settled down, gave up, and decided that she -was- tired. Lila decided about this time that it was time for her to go to sleep too.
That was about it. Zella just half-woke up a minute ago asking for her -new- bear friend, but when I went back in there, both her and Lila were half on the bed with their legs hanging off. I put their legs back in bed, covered them with their blanket, and gave Zella her bear back, and all is well in the Shaw household.
I guess we'll see how the rest of the night goes.
We got lots of pictures, but because of a wrong setting on an overly complicated camera, we ended up with a lot of blurry pictures. It's always good to have two cameras (plus the video camera rolling) :-)
We need to post more pictures, and hopefully should be able to soon. But until then here's some of their new big-girl beds. In case you didn't notice, the beds aren't the same. One was given to us, and we thought we had enough identical things anyways. The girls didn't fight over them, and enjoyed picking which one was theirs. 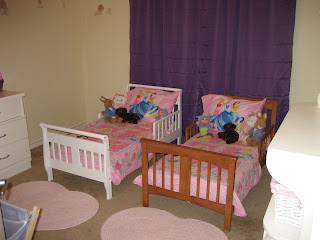 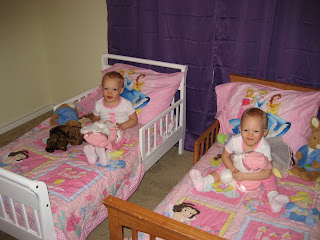 Wow they look so big sitting in those beds. You are so brave! I hope the night went well, I'll call you later.